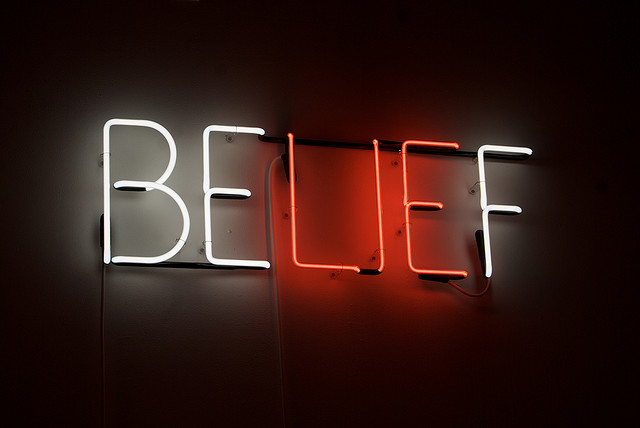 We all have central beliefs are about ourselves and our relations to others; they are like short cuts to which we revert, time after time. The problem arises when they become maladaptive, and in which case they often highlight an underlying belief about us being one of three things: unlovable, helpless or worthless.

They often originate in our childhood experiences, and can be related to our personality. For example, a child whose siblings are cruel to them and whose mother does not defend them, may start to believe that they are worthless. If their personality is perhaps more introvert, then they may never speak of their feelings to their mother which means they might never get the ‘your safety and wellbeing is important to me’ response which would quash the thought that they are worthless. So the belief continues.

These beliefs surface during times of psychological distress when they become activated. At times like this we will start to see, in the world around us, only the information which supports the core belief; we almost start to build a case for it being true.

What is hard, particularly when working as a therapist with such clients, is that these beliefs are not often articulated or easily articulated. If this is the case then we can follow the following structure:

We would call them ideas at the first stage and explain that there are two options, either they ARE incompetent (or unlovable or worthless) or they BELIEVE they are incompetent (or unlovable or worthless) and thus act incompetently. We would then explain about how core beliefs stop the good stuff getting through and illustrate this by asking them for an example of when this happened in the last week, i.e. when some evidence to the contrary happened but they wrote it off.

We would then help them gather information to strengthen a more accurate core belief by:

Of course there are ways of doing this and I’d like to explain this in a bit more detail.

I would also use an extreme example of an incompetent (for example) person that they know and ask what that person is doing. I would then ask how they are different from that person.

I might use a story or an example of someone famous to illustrate similarities between them and elicit how the wouldn’t judge the example unfavourably so illustrating how it is not logical why they should judge themselves in such a way i.e. Cinderella wasn’t bad just because she got abused.

It is also possible to use the emotion a client displays in session. So when the client is emotional, we might explore why and what the core belief is behind it and then ask about where they feel it in the body. Then we might ask them to remember a time when they were younger when they experienced this same feeling. Then we would discuss it and ask about how the other people in the situation were behaving and whether their actions were right. We might also ask why they and others might have acted that way. Then we might role play the situation with you, the therapist, as the young client and the client as the other person in the memory.

We could also do the same as above but using imagery instead. I might interview the younger client, getting them to imagine the scene when they were young, asking for details and ask for thoughts, feelings and behaviours, so that it intensifies the effect. Then I would ask if the older version of them can come into the scene to talk to them. I would get them to choose where they should stand and whether they’re holding hands etc. Then I might get the client to talk to themselves as the old client to young client, talking them through the conversation, i.e. saying older client, ask the younger client what’s wrong, now what would young client say? etc.

I would stop when the client is feeling a bit better and ask them to rate how believable (emotionally and intellectually) the old belief is and now the new belief. I would then take them back to the present day exercise and ask them how the same principle applies.

There are other CBT techniques which can also be used alongside this to help the client both manage real problems,and  help them cope with core beliefs and overcome some core beliefs:

Clients might not relate to the idea of core beliefs as thoughts but might call them memories, mental pictures, imaginings, fantasies, images, visual ideas.

Techniques which we use with images differ slightly:

We can also induce images to help us challenge a thought, for example:

Hopefully, this article will have given you more of an understanding of core beliefs within a CBT framework, but more importantly how, as therapists or individuals, we can challenge the unhelpful ones to help us live happier lives.

www.happii.uk is a website providing information about mental health and wellbeing.

Happii.uk is provided by Anna Batho, a therapist working in High Wycombe and providing therapy in Amersham and the wider Buckinghamshire (Bucks) region. You can contact her here.